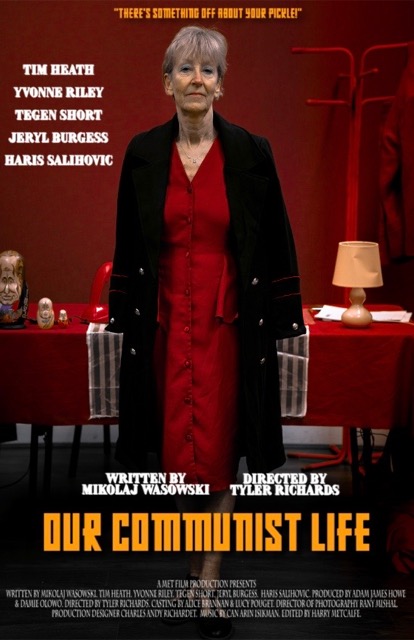 How did you get involved in making films?
I had wanted to tell stories from a young age, always had a strong love for cinema and storytelling. Although there isn’t much of a film industry in my hometown in Basingstoke, I began a film course in college, but soon discovered I wasn’t learning what I needed to about directing actors and the general filmmaking process. I began writing a feature film to stand out to film schools. Writing the screenplay took me three months and using a camcorder with friends and family we began shooting for the next six months until completion. The film got me into MET Film School in London and things fell into place from there.

What inspired you to make your movie?
Working with our writer Mikolaj Wasowski. He had such a beautifully satirical look at politics, class and government, of which I felt I hadn’t explored in a project before, so everything felt organic from the get go. I just felt privileged to have had a part in its creation.

How has your style evolved?
I learn something new with each film I make. Each time the process is different and you never really know what to expect. Learning to adapt to the constant changes in the filmmaking process is the most important lesson you’re not taught.

The Misrule Film Movement & Pink8 manifesto bring what to mind?
Film is a medium that is ever changing, although it’s never been easier to create content. The pink 8 manifesto is effectively the way I was introduced into guerrilla filmmaking. For lack of having willing crew and extensive kit at your disposal, shooting a film on camcorder with your friends is the best first step forward.

What can we expect from your next film?
It’s a proof of concept film revolving around three friends discovering love, sex and drugs, set during the second summer of love in the early days of 1980’s UK rave culture. We’re currently in the middle of post production.
Posted by CINEMA (Cult, Independent, Underground, Art House) at 01:57