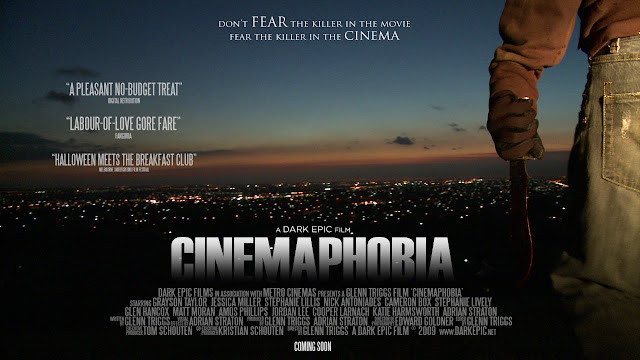 What does your film express about today’s generation?
I wanted to mix 'Halloween' with 'The Breakfast Club' into a horror film. I was a very young filmmaker at the time of 'Cinemaphobia' so a lot of me at that age was put into the film. Lots of silly jokes and over the top death scenes. It was really the only film I could of made at that time. It's a real fun film that shows our generation in their element with movies and serial killers!

What social circumstances lead you to make your new film?
I was working away at a call centre job which I hated and had the itch to make another feature film and I really wanted to tackle a horror film and quickly fell in love with the idea of a film set in a cinema. It had huge logistical challenges which I didn't really think
about before writing it. So the hard part was turning the script into the film without compromise which we managed to do! It was a two year project and I'm
glad to say I did all the music myself which took more time that I'd like to admit! :)

Whats next for you?
Since Cinemaphobia I have made 3 features film. '41', 'Apocalyptic' and most recently 'The Comet Kids' - which has been a 2.5 year project. It's my favourite film of the lot. Cinemaphobia was a huge learning curve about story, pacing and organization - it's the funniest film I've ever made and we're glad to be part of 'Straight Jacket Guerrilla Film Festival'.