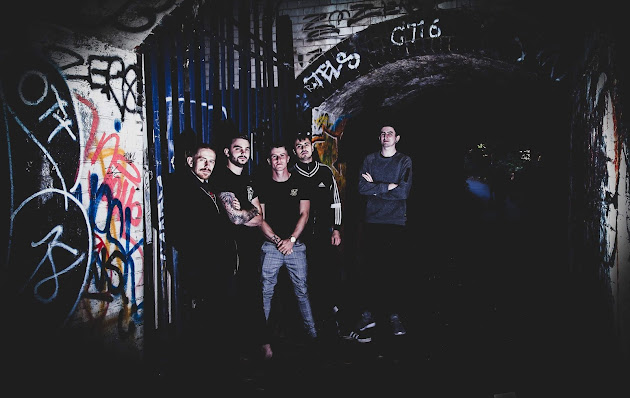 How did Rapturous come together? It all started about 10 years ago when we were at college. Luke B, Davey and Luke D were in the same class obviously studying music. Luke B, Luke D and Davey formed a band in college and began to connect with each other. Luke Bs sister got with Ashton's brother and they both said they should link up as they share a common interest; music. Nathan is Davey's best friend, and not only have they got a connection though the rhythm section they have it as best pals. One day Luke b, Luke d and Ashton were drinking 85% absinthe and they just started writing songs which lead to the band officially forming. We already knew a drummer that we jelled with, Davey, and Davey brought in beautiful Nathan on the bass. The rest is history and we’re still together as Rapturous.

What are your bands inspirations? Very diverse and wide spread, we all love different genre's and come from different music backgrounds with different musical influences. Genres such as metal, rock, dnb, blues, soul, reggae, are just a few we take inspiration from. If you were to compare us to any artists the closest would probably be Plan B, The Streets, and The Gorilla’s.

Tell us the story of how Signs was written? Luke b woke up with a melody in his head, found it on the guitar and brought it to band. That same melody become the chorus, followed by the lyrics coming together with help from Ash and Nathan. We didn’t know what it was about at the time but it feels like it predicted the future as it just explains 2020 and everything that has happened in the world while we’ve been taking the back seat.

Has the band had a creative year amidst all the turmoil in 2020? Yes, in the way of writing and recording for sure, but obviously playing live and gigging has slowed right down. It’s a blessing in a way as it has given us the chance to write new material.

Whats next for you guys? Well the next step is get our music and our message out in to the world; we’ve been quiet for too long and it's our time to be heard. We are currently working on an album which will run with singles being dropped first leading up to the album drop. Our next goal is to capture the peoples attention in a way that's never been done before; in a Rapturous way.