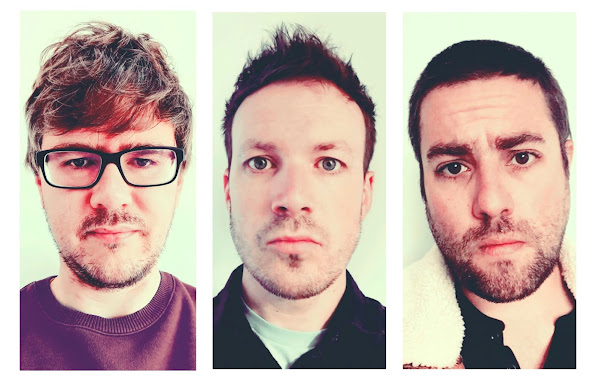 How did the Future Roads come together?

Adam: Me and Gav knew each other at School but didn’t really click until college. We played in various line-ups together and separately for a number of years and found Dave from an advert in a local music shop. This probably sounds quite an old fashioned way of connecting but it was a long time ago and just before social media kicked off so that is the way it worked. We played as The Roads and then Jericho Scream before stopping as life took over with work and family life’s. This incarnation is due to our friendships staying solid even though our glue was playing music together. Many nights out where one too many drinks and promises to each other to get in a practice room never quite happened but Covid - 19 and technology created the opportunity to create music again

Dave: Future Roads came together as a result of me asking Gav to send me some of his latest stuff to play around with in the studio. I was feeling cut off as lockdown struck. This then snowballed into becoming a sort of ‘virtual band’, which suited us lots as we’re all fathers and we had all grown disillusioned with the live gigging scene. We soon realised that what we had was a music - making machine, with Gav’s talent for song - writing, Adam’s magic basslines and my passion for mixing and producing.

Gav: Adam and I were at school together but gelled at college, where I started a band and we needed a bassist, he learnt fast! Dave, we met after several incarnations of the group, our mate Ian saw an advert from Dave and he joined as drummer, we were instant friends when we discovered we both had “Howl” by BRMC in the CD player at the same time. We played together for years, went up and down the country and did some recordings but it came to an end when playing live was more of a drag than fun. Best thing about the band has always been that its us as a gang of mates. Now I've begun writing again, Adam is creating amazing complimentary basslines to the songs and Dave is incredible at drumming, mixing and producing.

What influences do the band have ?

Adam: This is probably very varied for all three of us. Mine is literally dictated by mood so could be anything but I do listen to music everyday and find it hard if I can’t get to stick some cans on or have something in the background

Dave: As Gav is the songwriter, his influences flavour the music most. Mine and Adam’s influences are probably less easy to decipher, but they are sometimes detectable. We all meet at The Beatles, Oasis, Fleet Foxes, Smiths etc. But we also fragment, me into electronic music and Adam into metal and heavy stuff. Hardships, relationships, heartbreak, the pandemic – they’re all in there too.

Adam: Gav writes the songs, creates the shape and structure on acoustic and vocally. He sends the songs and rough notes then I add the bass track before shipping off to Dave for drums and production. It is odd that this together, but not together has generated more songs than ever before.

Dave: Gav churns a song out seemingly from nowhere. He posts a demo on Whatsapp . We hear it and tell him he’s a genius. Then he sends the files over to me and Adam via Dropbox. Adam steals a few minutes in his busy schedule to smash down a bassline and then everything comes to me in the home studio. If something’s not right, I get them to redo it. Then I send a series of rough mixes over to them, there’s a bit of back and forth until we all say it’s finished.

Gav: I’ve always written songs around saying and word association is key. Sometimes it is melody first and then sometimes I have a lyric that I write a melody for, then I just keep playing the part until the rest develops around it. Some songs take 20 minutes to fully form, some come good after 10 years!

What does the band name mean ?

Adam: We were The Roads and were known for that name. Future Roads is a nod back to that time but is us probably having the songs we wish we had back then.

Dave: Future Roads is our way of honouring what we used to be ‘The Roads’, but also the changes life brings when it turns into the future. I like the idea of roads leading somewhere unknown too.

Gav: Our original band was ‘The Roads’, so it wasn’t a massive stretch to put a spin on that name.

What first got you into music ?

Adam: I wanted to be in a band but couldn’t play anything or sing. Gav needed a bass player for a band he was starting in college so we caught the bus into town and spent every penny I had a bashed up bass and amp. Sat in his room where I followed the notes he was playing and learnt that way (some would say I’m still doing this... )

Dave: For me, music was always around in my house growing up. So was a piano and so was a drumkit. I spent lots of my time listening to very rhythmic stuff, like prodigy, dance, pop and reggae. I’d obsess about rhythms and learn them intricately. This all happened amidst a background of 60’s n 70’s pop, rock and progressive rock that my Dad would play. Pink Floyd, Beatles, Kinks, Caravan, Marillion etc. My Dad taught me to have a critical ear – he still offers his even when it’s unwelcome! Drumming and being in a band also opened lots of other doors – a great social life for one. And girls.

Gav: My Mum and Dad both play instruments and music was always played around the house. It also helps having an older brother who is an ace guitarist with a wicked music collection, I was always robbing his cassettes!

Any crazy stories that have happened to the band ?

Adam: What goes on tour, stays on tour

Dave: None whatsoever. Gav once pissed on his jeans moments before going on stage and had to dry his jeans under the hand dryer. That’s about it. We’re all pretty sensible.

Gav: I don’t accept the premise to be honest, one mans “crazy” is another guy just rolling his eyes. Lets just say we had loads of fun in our twenties, something was always happening to entertain us.

What's next in store for the band?

Adam: You get bogged down by plans it's so easy to be disappointed or lose focus. We are onto a good thing and have some great songs that will form an album (something we never really did before). For me playing live again would be great not in a touring way but as a one off to feel that excitement again but not sure if we could do that with the state of live venues, our lives and my hands ceasing up after about 10 mins of playing...

Dave: We have no plans, other than to keep doing what we’re doing. Make songs, get them out there and enjoy it all. Above all else, we’re great friends – that comes first. Maybe one day we’ll find ourselves in a practice room trying actually play the songs for real.

Gav: We’ll keep writing and recording whilst it feels good and it interests us. Things are cyclical, we will always be great mates and the music side of things will naturally ebb and flow. But right now we will release our first album and hopefully more will follow