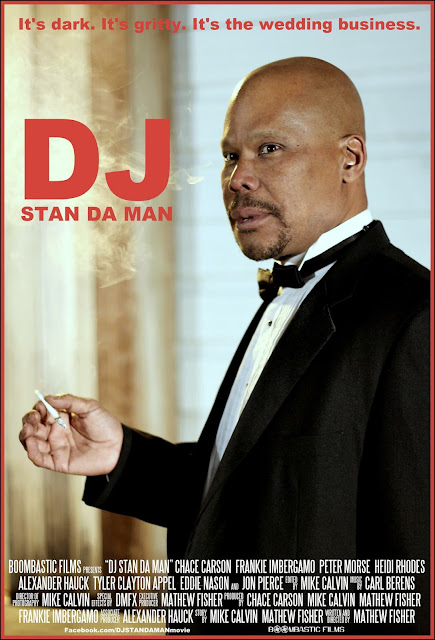 What does your film express about today’s generation?
DJ Stan Da Man is an older character but I think he fits the free spirited kind of "fuck you' I'm gonna do what I want" attitude of today's generation. He is who he is and doesn't care who's watching and what there opinion is.

What social circumstances lead you to make your new film?
Well... The film came about while I was working as a wedding DJ's assistant and the behind the scenes of the biggest days of people's lives are hectic, dramatic and pure comedy. Every character and situation stems from an actual person or event. One of the best compliments I've gotten from people who work in that field is how accurately the situations are directed, the film really is an inside look at the wedding business. Drunks, drug addicts, bridezilla's and colorful characters.

What do you think about the PINK8 Manifesto & Punk Cinema?
I think the movement is the new independence, the underground. In a medium so run my money and PC values it's nice to have a group still making films for the love of it. Films they want to see and make... Instead of film schools that pump out cookie cutter film makers we have film makers that have trained themselves by trial and error and a love for cinema. Studying the films of the people who inspired them and telling their stories instead of what's "hot" at the current moment in time but once that moment is over so is the shelf life of most of those films. Good, long lasting films come from passion and creativity. The art form is like any other art form you do it because it's in you and you have to get it out not because it's a job ... I've hated every job I've ever had but I've loved every production I've ever worked on... So that probably sums it up best.
Whats next for you?
I'm premiering my latest short film INSOMNIAC on June 22nd starring Richard Chandler, Ray Boutin, Alexander Hauck and Sabrina Dennison from Alejandro Jodorowsky's Santa Sangre. I'm also prepping for my next feature a horror film called The Wicked Hollows.