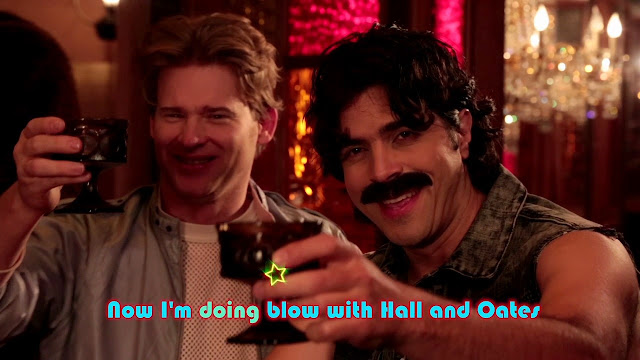 WHAT DOES YOUR FILM EXPRESS ABOUT TODAY’S GENERATION?
I’m not sure if my music video says anything about today’s generation, but I think it is an illustration of the fascination that many people have with eras past.  Personally, I have always been obsessed with the 1970’s and early 80’s.  Most modern amenities were available, but digital technology was in its infancy and people were looking around instead of continuously down or at a screen.  It just seems like a magical era, where anything was possible in the music and entertainment industry. Regardless of which time period someone lives, which is kind of a lottery if you think of it, all of us are faced with our own day-to-day struggles and patterns of life.  Usually, we’re just trying to get by.  That’s why I decided to take my favorite era, and construct my own alternate reality where I’m partying with Hall and Oates and winning Tony awards like it’s no tomorrow!  The Pleasure Dome video is silly and goofy comedy that comes from a genuine place of love and fascination.
WHAT SOCIAL CIRCUMSTANCES LEAD YOU TO MAKE YOUR NEW FILM?
Making funk-disco-comedy songs is probably not the best way to get noticed in today’s music scene, but we all have to create from the heart.  I decided to make an album inspired by 70’s disco and R&B; while also poking fun of the era in a loving way.  It’s amazing to watch old footage and see the crazy style choices of artists from back in the day.  Whether it was Dr. Hook’s maraca shaker dance moves, or Cameo’s flamboyant full-body leotards, it was all good back then.  So much of today’s music is about portraying a “cool” image, but the songwriting is often suspect at best.  I would much rather have questionable style and great song-writing any day.
WHAT DO YOU THINK ABOUT THE PINK8 MANIFESTO AND PUNK CINEMA
I think the idea of being free from conventional rules when creating film and art is amazing.  It’s all too easy to forget why we started creating in the first place.  If the love is not there, frustration is bound to become overwhelming and it is all too easy to get frustrated and give up when production becomes challenging.
WHAT’S NEXT FOR YOU?
I’m currently working on my next video: “Garbage Island”.  It’s about how I become so disenchanted with society, that I move out to the Pacific Garbage Patch and claim it as my new home.   I’m also booking gigs for the late summer and fall.  Some more Harry Muffs Disco gigs are on the horizon!
Posted by CINEMA (Cult, Independent, Underground, Art House) at 02:04