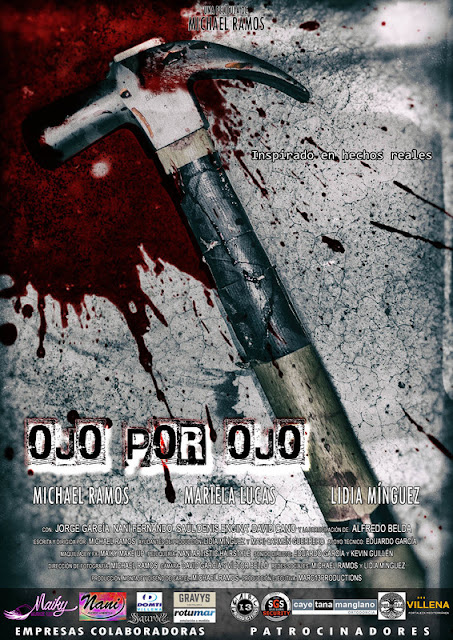 
*How did you get into making films?My passion for the seventh art comes as a child, the first film that my father takes me to see the cinema was: 'Masters of the Universe'. Later came 'Teenage Mutant Ninja Turtles' in this way watching my series of favorite drawings on the big screen begins to define me as what I am now.Later came the martial arts cinema and 'Jean-Claude Van Damme' was my reference for action movies, just like 'Jim Carrey' was for my comic side.*What inspired you to make your movie?Titles like: 'Saw' was what inspired me for the torture scenes, but other Spanish series did their bit.*How has your style evolved?A lot, I started as a reporter, later I made documentaries, then web series, then short films and 'Ojo por Ojo', which was my first film.*Tell us any strange or funny stories while making the film?So we get a psychopathy, in full repetition of one of the scenes or a childish voice that came out of nowhere, we all look at the point where that voice came out, and there was nobody or anything, later at home, reviewing material 2 of the microphones recorded that same voice, but the sinister thing is that the voice was adult and metallic ... very dark ... then my makeup artist had strange things happen, the torture scenes were recorded in the basement of her makeup workshop, and She claims to have heard footsteps going up the stairs and the door closed or opening violently.Then, in the scene, in the movie theatre, all the lights went out violently and stopped working. The funny thing is that at home the spotlights went back to work without problems.*The Misrule Film Movement & Pink8 manifesto bring what to mind?I do not understand the question XD*What can we expect from your next film?

It's already underway, it's titled 'FEAR (The wicked)' and its Teaser you can see here.
https://www.youtube.com/watch?v=ArzGvsZbWB8
It will be of psychological terror, with tints of Japanese terror.
Posted by CINEMA (Cult, Independent, Underground, Art House) at 02:13